After attaining Independence on 15th August, 1947 the prime objective of our government was welfare of masses. To achieve this objective Community Development Programme was the first major rural development programme launched after Independence on 2nd October, 1952 to provide for a substantial increase in country agriculture produce, for improvement in system of communication, rural health and hygiene, education and also to initiate and direct a process of integrated culture change aimed at transforming the social and economic life of the villagers.

Unfortunately, this programme could not achieve the desired results and Union government formed a Parliamentary committee in 1957 under the Chairmanship of Sh. Balwant Rai Mehta to review the working of community development programme and recommend ways to improve this programme. This committee submitted its report in November, 1957 and recommended for establishment of Democratic Decentralisation i.e. Panchayati Raj. Panchayati Raj means system of rural self government to built democracy at the grass root level.

This word Panchayat literally means assembly of 5 wise and respected elders chosen and accepted by local community. Panchayats have been in existence since centuries in India and used to resolve the local issues by mutual persuasion without involving any Police or Legal Authority.

After attaining Independence it was the dream of Mahatma Gandhi to establish Panchayati Raj in India.

We get inspiration to start Panchayati Raj under (Article 40) of the Constitution under Directive Principles of State Policy (D.P.S.P.).

Union government accepted the recommendations of Balwant Raj Mehta committee and started Panchayati Raj System in India on 2nd October, 1959. Prime Minister Jawahar Lal Nehru inaugurated this system by lighting a lamp at Mehal Village, Nagaur District of Rajasthan. Andhra Pradesh was the Second State to implement this programme on 11th October, 1959. Now, our 25 States and 7 Union Territories have implemented the programme (Nagaland, Meghalaya, Mizoram, and Delhi do not have Panchayati Raj system). 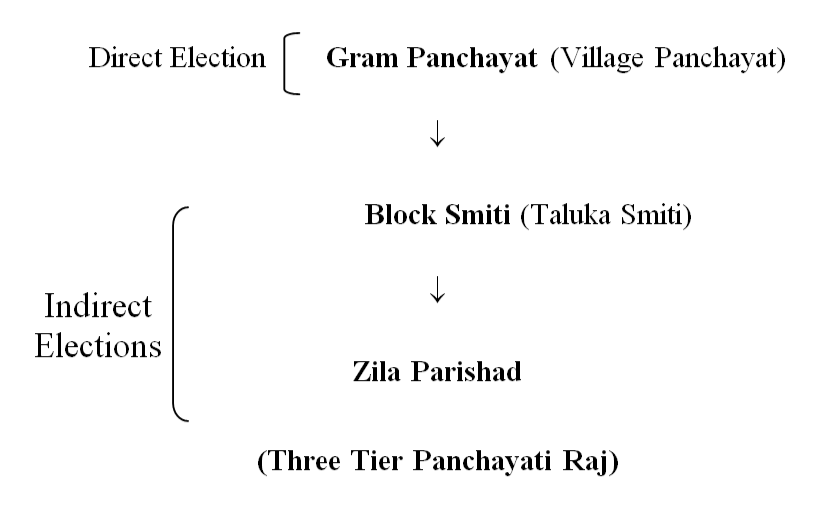 Unfortunately Panchayati Raj too could not achieve the desired results and Janta Party Government in December, 1977 constituted a Parliamentary committee under the Chairmanship of Sh. Ashok Mehta to review the working of Panchayati Raj system and suggest ways to improve the system. Sh. Ashok Mehta committee submitted its report in 1978 and made the following recommendations:

(i) There should be uniform tenure of 5 years of Panchayati Raj institution.

(iii) The middle tier – Block Smiti should be abolished and system should be of two tiers only.

(iv) Constitutional status should be awarded to Panchayati Raj System.

Panchayati Raj System is funded by: